The Eb piano chord is a major chord and made up of the notes Eb G and Bb.

The Eb major chord on piano is important to learn, all major chords are fundamental, however, it is not one of the most popular chords you'll see in chord sheets.

We're going to learn all about the Eb major chord for piano here including:

The notes of the Eb piano chord are: Eb G Bb.

A great way to remember how to play the Eb chord is "black white black". If you look at the Eb piano chord chart below, you'll see that you're using a black note, white note and then black note. 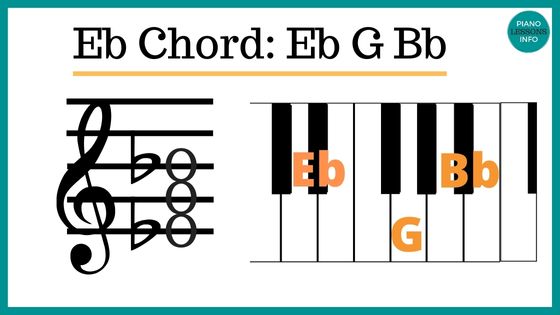 How To Play Eb Major Chord on Piano

How do you play Eb chord on piano? Here's a super short video to help you out. You'll also be able to hear how it sounds.

Although it might feel weird at first, I'd recommend using the standard finger positions for Eb major chord.

These are: thumb, middle finger and pinkie (left hand and right hand) to play the Eb chord.

One of the things I get asked sometimes is if you should play so high up in the keys - meaning quite close to where you'd have your music sitting - and that's totally fine. 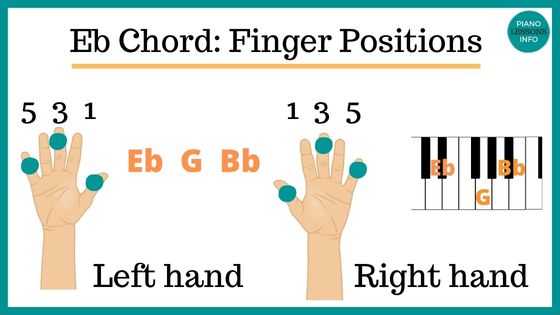 When you see an Eb/G chord, it means to play the G as your lowest note in your left hand. G is your bass note. All the other notes of the chord should come above that.

This changes the sound of the chord a bit so that there's not such an emphasis on the root note - Eb. It'll sound a bit more transitory and not so final.

When you see Eb/Bb, it means to play Bb as your lowest note in your left hand. Bb is your bass note. You are still playing the Eb chord, and the G and Eb will be played above the Bb, you just need to keep Bb as your bass.

You can practice the Eb major chord with these chord progressions. (And if you need help with how to practice them, click here.)

Eb inversions are great to learn and I particularly like playing the Eb chord on piano in second inversion. It moves quite nicely into the other chords from that area. But either way, it's always good to learn inversions for chords. 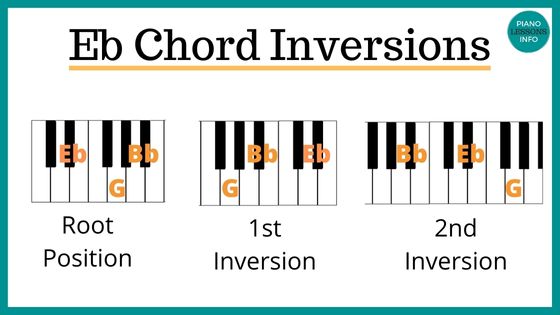 The inversions for the Eb major chord are:

The Eb chord is a major chord and built on the 1st, 3rd and 5th notes of the major scale. If you look at the scale below, you can see those notes are Eb, G and Bb. 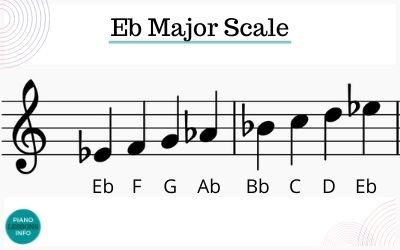 The key signature of Eb major is 3 flats, Eb, Ab and Bb but you'll also find this chord in the key of Bb and Ab. It's an important chord to understand when playing in flat keys.