The D major chord is one of the first chords with sharps everyone learns on piano. It's really common to see and a great one to learn. This is also called a D chord. 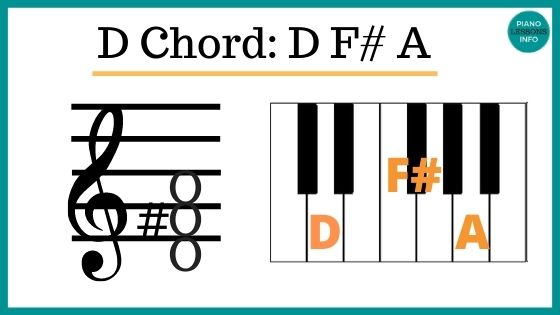 You can play the D, F# and A in any order, in any hand. Generally, D needs to be the lowest note you play - like in your left hand.

If you see D/F#, the F# is referring to the bass note.

On the piano, this would usually mean to play F# in the left hand as the lowest note. D and A would come above.

f you see D/A, the D is referring to the bass note.

On the piano, this would usually mean to play A in the left hand as the lowest note. D and F# would come above.

Where The D Chord Comes From (Theory)

The D chord or D major chord comes from the D major scale.

A major chord is the 1st, 3rd and 5th notes of the major scale which is why this chord has the notes D, F# and A.

Which Fingers Do You Use?

For any major chord in the root position (with D at the bottom in this case), you can use your thumb, middle finger and pinkie. In piano, these are finger numbers 1, 3 and 5 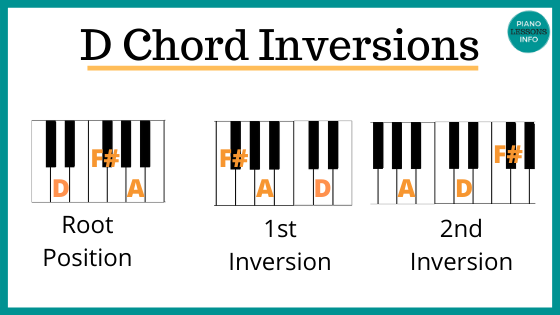 You can play the D chord on the piano in different positions. There are 2 other standard positions and we call these inversions.

Basically, it means taking a note from the bottom of the chord and playing it on the top.

Ready to learn more about piano chords? Start by getting the free chord chart below.

For more on specific chords, you can visit the Piano Chord Charts here.