C# Piano Chord Notes, Inversions & How To Play It


The C# piano chord is a major chord that is played on all sharps but not all black notes. It's made up of the notes C#, E# and G#.

So how do you play the C# piano chord? Just look below where you'll find:

It's basically like the C chord only everything is taken up one semi-tone and made sharp. And E# is technically the F key but for reasons that involve theory, we need to call it E#.

The C# chord is also exactly the same as the Db chord. All the notes are the same, they are just called different things. (Db chord = Db, F, Ab.)

Here are the notes of the C sharp major chord on the treble clef and on the piano keys. 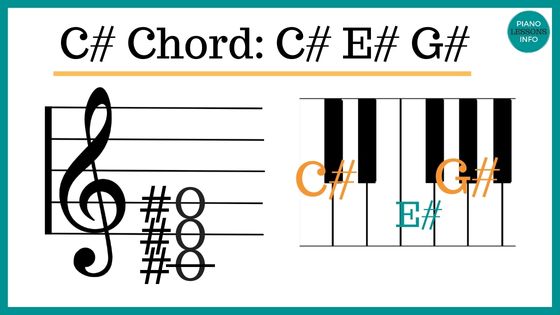 How To Play C Sharp Chord

This very short video will show you where the notes are for the C# chord, how to play C# and you'll be able to hear what it sounds like.

To play the C# chord on piano, you can use the same fingers you use for any major chord or minor chord (in root position). 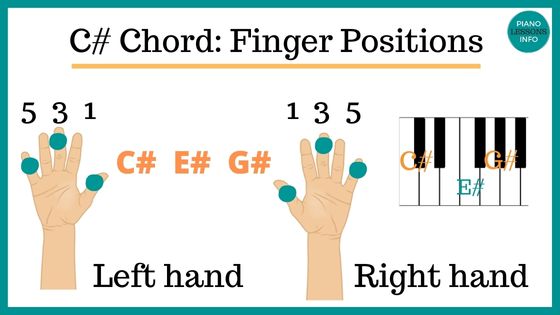 One chord variation you may see with the C sharp chord is C#/G#. When you see this, you play G# as the lowest note in your left hand (instead of C#). The rest of the notes of the chord will go above this.

Basically, with C#/G#, G sharp is now your bass note.

Here are some chord progressions for practicing C# major chord:

Here are the inversions for the C# major chord. Remember, for inversions, take the bottom note and put it on top to play the next inversion. 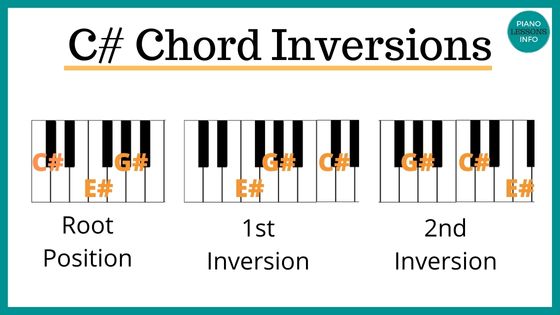 The C# piano chord inversions are:

As I mentioned earlier, the C# chord and Db chord are exactly the same. They are played on the exact same notes on the piano. But, that doesn't mean they are interchangeable in terms of chord names.

The reason we have these two chords, even though they are the same when played, is because of the system of key signatures. And when we use key signatures, we have only sharps or only flats in the key signature.

Db is often preferred over C# because the key of Db has 5 flats while the key of C# has 7 sharps - a lot to remember.

Here's a quick look at the keys of Db and C# and their basic chord names:

As you can see, the chords of Db are a bit less scary to look at even though they are all exactly the same.