How To Play Ab Piano Chord


The Ab piano chord is a major chord and has the notes Ab, C and Eb. All major chords, including Ab major, are essential to learn and understand. It'll set you up quite well for continuing to play chords on piano.

We're going to learn more about the A flat major chord here including:

The notes of the Ab major chord are: Ab C Eb.

These notes can be played in any order, it doesn't have to be just Ab, C and Eb in a little group.

What you do want is Ab as your lowest note in the left hand as it's the root note. Root notes are important. The rest of the notes can be played above that.

This means you can play the Ab chord in your right hand or your left hand. I usually play it in my right hand together with a melody.

The key is to keep Ab as the bass note and play C and Eb and probably Ab again somewhere above that.

What If You See AB?

I have seen the Ab chord written as AB - and you may be wondering what it means if you come across that also.

Here are the notes of the A flat major chord on the treble clef and the piano keys. 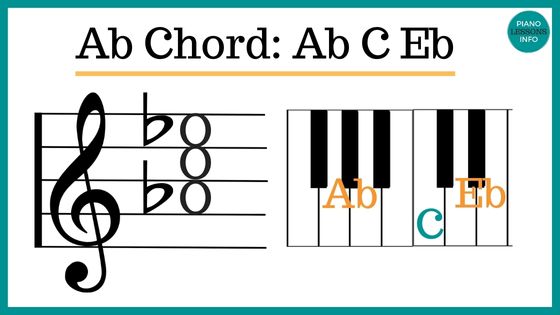 How To Play Ab Major Chord

This very short video will take you through how to play the Ab chord on the piano keyboard.

When chords start on flats or a black key, it can bring up the question of which fingers to use to play them. When you look at the Ab chord below, you can see that it is played on 2 black keys with a white key in the middle.

You use the same fingers you would for any other major or minor chord - fingers 1, 3 and 5. Or thumb, middle finger and pinkie. 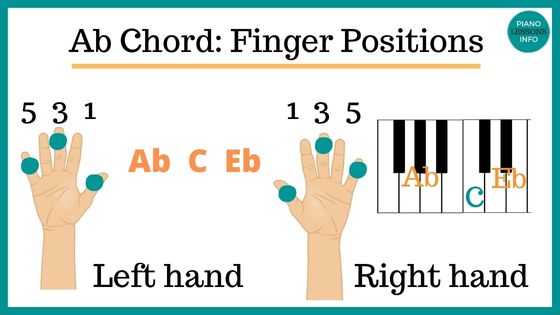 You might notice that you need to play further up into the keyboard for a chord like this and that's fine.

A great idea for this chord is also learn the inversions (see below) so that you have options as for where to play it in relation to other chords you're playing. You may also find another inversion more comfortable to play.

The Ab/C piano chord is a slash chord. This type of chord indicates what you should play as your bass note in your left hand. In the case of Ab/C, you play C in your left hand as the bass note and rest of the notes for the Ab major chord above that.

If you are playing the Ab chord in your left hand, you will now need to learn the inversions (see below) in order to play this chord as indicated.

When you see Ab/Eb, it indicates that you should play the Eb as your bass note in your left hand. Eb is your lowest note. The rest of the notes for the Ab chord go above this.

As with Ab/C, if you are used to playing chords in your left hand primarily, you'll need to play an inversion of the Ab chord in order to get that Eb as your lowest note.

Learning the Ab piano chord inversions are great for practice and learning technique but also speed and playing Ab in a more comfortable position.

If you play chords primarily in your left hand, inversions are essential for you. (I do have a mini course on this inside of the Piano Chords Club if you want more help with this.)

Inversions are standard positions to play chords in. As you can see in the picture below, you basically take the lowest note of the chord and then put on top to play the next inversion. 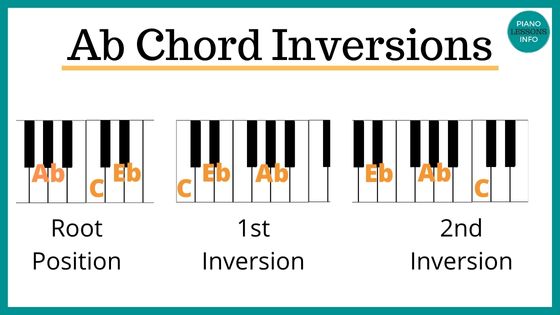 The Ab piano chord inversions are:

As you can see in the picture below, the first, third and fifth notes of the Ab major scale are Ab, C and Eb. So that is where this chord comes from. 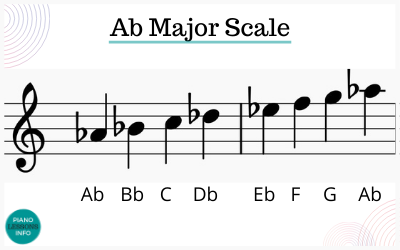 You will find this chord in the key of Ab as well as other keys like Eb major and Db major.

When we start playing in keys like this, there are often lots of flats that you need to play which makes it a less attractive key and chord to some. Ab is quite common in classical piano music though.

If you are playing in the key of Ab, there are 4 flats to play in the key signature. They are Bb, Eb, Ab, and Db.

Want a challenge? Use the Ab major scale to find out the rest of the chords in the key of Ab major.