How To Figure Out Chords from Scales


One great thing about knowing a scale is it gives you the information you need to figure out chords.

Scales are basically the foundation of chords or the building blocks. You just need to know the plans (the chord formula) to pull out the blocks you need.

Here we'll look at a few scales and you'll see how you can work out chords from them.

How to Figure Out Chords - Video Lesson

The basic structure in our musical system is the major scale and the key of that scale.

Chord formulas basically pick out certain notes from the major scale, leave them be or alter them (depending on the chord name) and then you play those notes together.

So if you're going to learn any scales, major scales are the first scales to learn.

For this all to make sense, let's take a look at how to figure out the major chord.

Figuring Out the Major Chord

Every chord has a formula and the formula for the major chord is: 1 3 5.

What does this mean?

It means the the first, third and fifth notes of the major scale make a major chord. 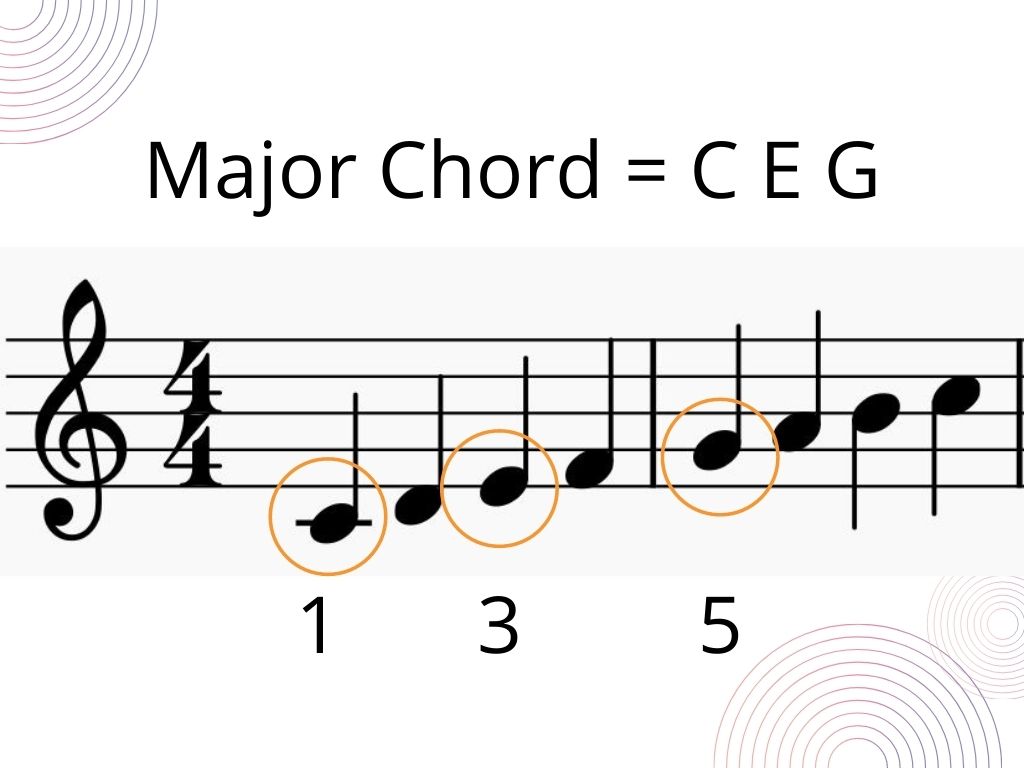 Those 3 notes are what make the C major scale.

Let's look at another example - and with this one you'll see why there's a sharp in the chord rather than a white note.

The D scale has 2 sharps in it - F# and C#. So we need to factor these in when figuring out the chord. 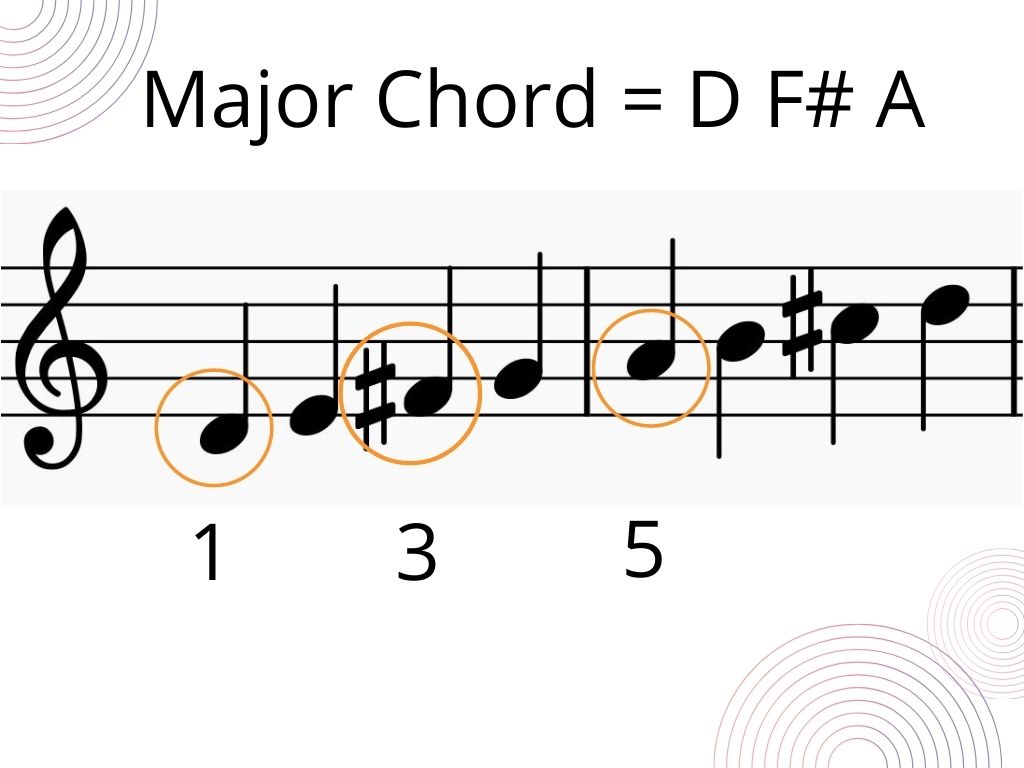 Figuring Out the D Major Chord

The third note of the scale is F#. So this means our chord also needs to use F#. This is why it's not just F. F# is in the scale and the key signature so we need to play that.

The fifth note of the scale is A and that's the last note of our chord - D F# A.

Minor chords are different. The chord formula tells is to change one of the notes in the chord.

When you see the flat before the 3, it means we need to lower the third note of the scale. And that means you need to take it down a semi-tone (to the left on the piano).

Let's do another example with G. The G major chord is G B D. To make this minor, we need to lower the third note of the scale - that's B. So B becomes Bb. G minor chord (Gm) = G Bb D.

D major is a bit different because we have a sharp in our major chord. The D chord is D F# A. To lower the third, we need to make the sharp into a natural. So F# becomes F. The D minor chord (Dm) is D F A.

To practice this, start making major chords on the piano - you can even use the chord cheat sheet for this. (See below if you don't have it yet - it's free.)

With every major chord you play, turn it next into a minor chord. For example, C major (C E G) becomes C minor (C Eb G).

You can going up all the white notes on the piano making major than minor chords. And then go up all the black notes doing the same thing. Or you can choose random notes to make both. This will really help you to figure out chords.

How to Figure Out Major 7th Chords

Let's do one more type of chord formula - the major 7th chord.

To play a major seventh chord, you play the 1st, 3rd, 5th and 7th notes of the major scale.

For G major, which has a F# in the key signature, we need to factor the sharp in to the 7th note. So the GM7 chord will be G B D F#.

D major has sharps too. F# and C#. So instead of just playing D F A C (this is actually the D minor seventh chord), we will be playing D F# A C#. We have those notes in the scale and our chord formula doesn't tell us to do anything to them, so we know what we're playing.

From here, there are 2 things you can continue on learning.

1. Scales - learn your scales to learn your keys and chords. You can join the scales challenge to do this is you're not already a part of it.

3. If you really want to learn chords and be great at them, take my piano chords course. It's the best way to learn chords quickly (and not miss anything along the way).