B Flat Major Scale on Piano

Notes of the Bb Major Scale

The B flat major scale starts and ends on Bb. It has 2 black notes in it's key signature - Bb and Eb.

The key of Bb has Bb and Eb.

The notes of the Bb major scale are: Bb C D Eb F G A Bb 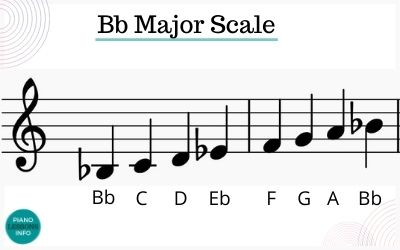 Notes of B Flat Major Scale 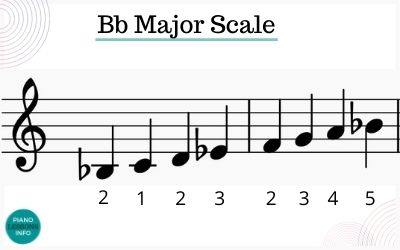 The left hand is also unique and has it's own finger patterns. 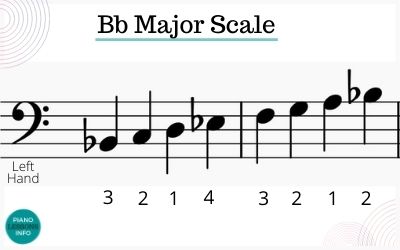 Putting the Bb Scale Hands Together

Here are some tips for playing the B flat major scale hands together:

The B flat major scale is not a beginner scale so take that into account when learning it. It's like everything else, it takes time and practice to learn.

Here are pictures / diagrams of the Bb major scale on piano going both up and back down for the treble clef and right hand and the bass clef and left hand. 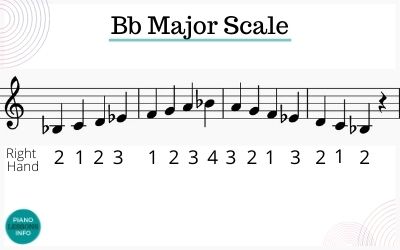 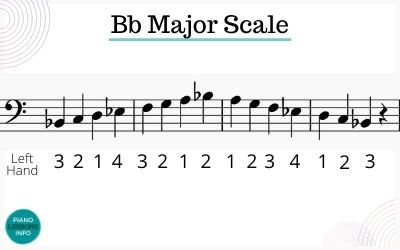 The Key Signature of B Flat Major

Now that you know the B flat major scale, you also know the key signature of B flat major. If the scale as 2 flats, the key does.

(The order of the first 4 flats spells the word BEAD, so we have the first 2 letters of the word here.)

Understand the Bb Chord from the Bb Scale

Another thing we can learn from this scale is the Bb major chord - which is written as just Bb.

A major chord is built off of the first, third and fifth notes of the scale.

When you look at the scale you can see:

If you've never played the B flat major scale on piano before, you can give it a try this week!

You can also play the B flat major chord at the end of your scale.